Crossroads C5 Leaders Get a Taste of College Life 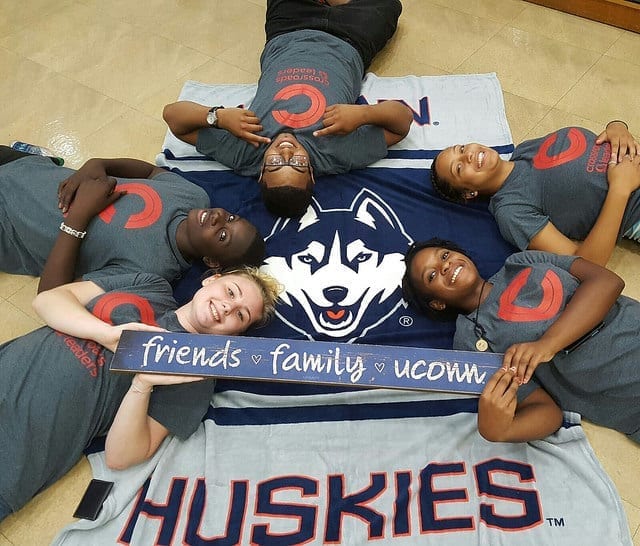 The College Tour provides students with an in-depth explanation of the application process as well as an opportunity to experience first-hand what it is like to be a student living, working and attending classes on a college campus. I was particularly excited to join the teens on the first College Tour this year because nine years earlier I was a C5 teen myself attending my first College Tour with Crossroads. Now, a college graduate and full time employee at Crossroads, I feel I was able to bring a unique perspective since I was in their position not too long ago as a teen and now can share insight as an alumni and counselor.

Throughout the school year, the students worked in small committees with staff to outline which schools to visit, classes to attend and members of the administration to meet. It was decided that the schools on the 2016 College Tour would include: University of Rhode Island (URI), Brown University, Rhode Island School of Design (RISD), Wesleyan University, University of Connecticut (UCONN), Westfield State University, Union College and University of Massachusetts Amherst (UMASS Amherst). While at the schools, the teens participated in student-run campus tours, discussions with admissions and financial aid officers and various staff-led workshops to enhance important topics such as campus safety, health services, academic advising and peer mentoring.

“Attending the College Tour made me more passionate about learning and trying new things, both inside and outside of the classroom” – David, C5 Leader

URI was the first stop on the college tour. It was also where the teens their first two nights. For most, this was their first experience in a dorm room, and their excitement shone through as they imagined themselves living on campus. While being shown around campus, Jocelyn, a C5 Leader, reminded everyone that it is important to take in everything while on the tour, the positive and the negative. The College Tour is a jumpstart to figure out things like your ideal school size, location, and majors/minors, to name a few.

Brown, being an Ivy League school, provided the students with yet another perspective beyond public and private schools. Kalil and Marc, two teens interested in graphic design and animation, were especially interested to learn that Brown has a strong partnership with the Rhode Island School of Design (RISD) and actually offer dual-degrees between schools. Some teen-initiated questions during the tour included: the roommate selection process, the student/professor ratio, types of scholarships available/financial aid and study abroad opportunities.

As they first arrived at Wesleyan, everyone was impressed by the look of the campus and the surrounding area. Most of the teens agreed that they liked the way the school was spaced out through the city; you are immersed in the city but still maintain the college campus atmosphere as well. Wesleyan’s Open Curriculum program, meaning that they do not require core subject classes, intrigued the teens. Some liked that from their first day, they could take all classes that they find most interesting and not the typical English, Math, and Science courses. Others, however, preferred the structure that a core curriculum provides, especially as they transition from high school to college.

All excited to see UCONN, many of the teens were taken aback by the sheer size of the campus – some found it inspiring while others found it overwhelming. Many of the teens are currently student-athletes at their respective high schools, so visiting the sports complex where UCONN’s Division 1 teams play inspired many to consider continuing their sport in college. After the campus tour, the teens attended two mock classes; one in the Women’s Studies Department and the other in the African American Center. Dr. Willena Price of the African American Center talked about some of the larger adjustments that students need to start making during their time in high school so they can be successful in college. Some suggestions included: taking challenging courses and not “slacking off” during your senior year, form relationships with teachers/faculty so they can write strong letters of recommendation and start getting on a sleep/work regimen that allows you to get a full night’s sleep and finish homework assignments at a decent time.  The teens’ time at UCONN concluded with a photo challenge, where they took pictures of themselves with something on campus that incorporated both UCONN and C5 pride.

Westfield was the first school in Massachusetts that the teens visited. During the tour, they talked about the differences between attending an in-state and out-of-state school. After touring the campus there was an info session where Assistant Dean of Admissions Michael Mazeika talked about what admissions officers are looking for on college applications, ways to make yourself stand out on your application, and the different academic and social opportunities that Westfield State provides.

With the student population totaling just over 2,200, Union was the smallest college visited on the college tour. Our teens had the chance to sit in on a mock lecture with Dr. Gretchel Hathaway, Dean of Diversity and Inclusion and Chief Diversity Officer. Dr. Hathaway treated the lecture as if it was a real first day of class, meaning students could not have hats on, no cell phones were allowed and those who did not raise their hands were called on first (a favorite engagement method of Dr. Hathaway). The teens were fully engaged throughout the discussion of culturally insensitive words that good-intentioned people use.

Many of the teens had expressed interest in applying to UMASS Amherst, so they were happy to be able to visit. Similar to UCONN, the size of the school was the first thing the teens noticed. Some were concerned about whether they would be able to make it to all of their classes on time. The tour guides reassured them, reminding them that the students have various day and time options for classes, so there is plenty of opportunity to make sure their class schedule works for their lifestyle.

The teens completed the first college tour with a wealth of resources and information. After seeing and living the college life for a week, they each now have a more succinct list of what to look for when it comes to applying to and ultimately deciding on where to attend. They were able to get a great introduction to the different types of colleges and universities (public/private, large/small, majors offered, etc.) that are available and where they see themselves best. The College Tour is just another tool used by Crossroads to provide support and guidance for college access and post-secondary success. As incoming high school juniors, the C5 Leaders got a head start on many of their peers by not only visiting colleges, but by fully immersing themselves in the college culture and environment by living in dorm rooms, eating college food, going on campus tours, and meeting with faculty members and professors. In addition to the summer College Tour, members of our College Access team also offer mini day tours of colleges in and around Boston, one-on-one mentoring to help guide the students through the application and financial aid process and various workshops throughout the school year to make sure they are staying on track with deadlines and requirements.