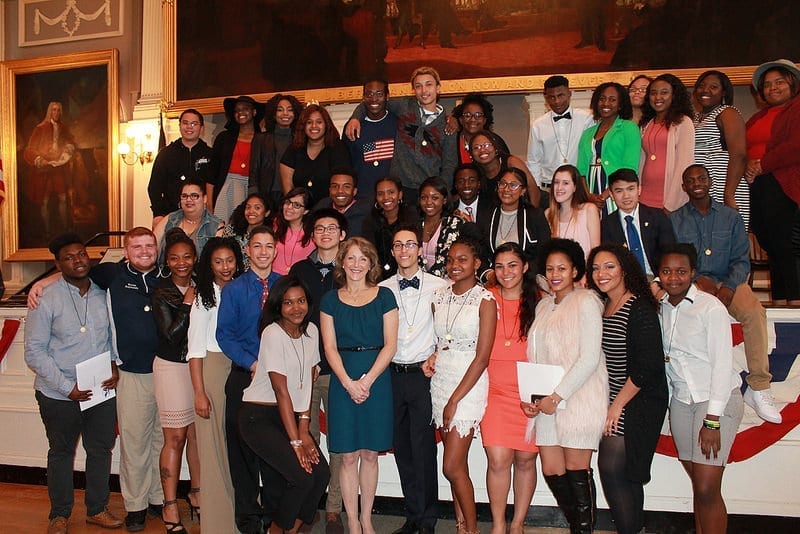 On Sunday, May 1, 50 high school seniors celebrated everything they have accomplished over the past five years in a special C5 Leaders graduation ceremony held at Faneuil Hall.   We were thrilled to welcome Massachusetts First Lady Lauren Baker who delivered the commencement address and who congratulated this class for their many accomplishments and inspiring them to go out and continue changing the world.
As a class, this group has performed over 4,300 hours of community service this year alone, and Mrs. Baker awarded 17 graduates with the President’s Volunteer Service Award which recognizes United States citizens who have performed over 100 hours of service in a 12-month period.
“The graduates of the Crossroads C5 Leaders program have been persistent and inspiring in taking on the challenges facing them,” said Mrs. Baker. “In spite of some significant obstacles, these young people have put tremendous effort into focusing on their education while being committed to giving back to their communities and representing the best of the Commonwealth.”
Each teen has spent a portion of their senior year focused on their Medallion projects, a personal community service project designed and implemented by them to impact the community. In addition, over April Vacation 35 of these teens embarked on a weeklong Community Service Road Trip to Baltimore that they planned alongside Crossroads staff. It was the largest group ever to attend the yearly trip.
Isaiah Valmont was chosen by his peers to address his class. He reflected on his Crossroads experience, “Crossroads is more than just going to camp in the summer as a little getaway from the unfortunate realities of the communities we come from. Rather, C5 is a lifestyle characterized by a character-driven, community-focused, challenge-ready, and college-bound doctrine that works to commit its participants to a better future, not only for ourselves, but for the world.”
“This class has a particular commitment to service that is both inspiring and so fundamental to what we do. They have set the bar high for future classes and have been excellent role models for future graduates,” said Deb Samuels.
Seventy percent of the graduating class will be first generation scholars, and some of the class is pursuing different dreams. The Class of 2016 has decided to attend or participate in the following institutions: Anna Maria College, the Army, Assumption College, Bridgewater State University, Bunker Hill Community College, Community College of Rhode Island, Clark Atlanta University, Curry College, Delaware State University, Harvard University, Hofstra University, Johnson and Wales, Lasell College, Manchester Community College, Massasoit Community College, Massachusetts College of Liberal Arts, Merrimack College, Mitchell College, the National Guard, New England Conservatory, Newbury College, Northeastern University, Pennsylvania State University, Pine Manor College, Regis College, Rhode Island College, Roger Williams University, Saint Louis University, Salem State University, The Canterbury School in Connecticut, Unity College, University of Massachusetts, Western New England University and Year Up.
We sincerely look forward to maintaining all the wonderful relationships we have with these young adults as they move forward and continue to leave their marks on the world. We know that each one of them will accomplish great things, and it is with heavy hearts that we watch them grow and reach for bigger stages to shine on.