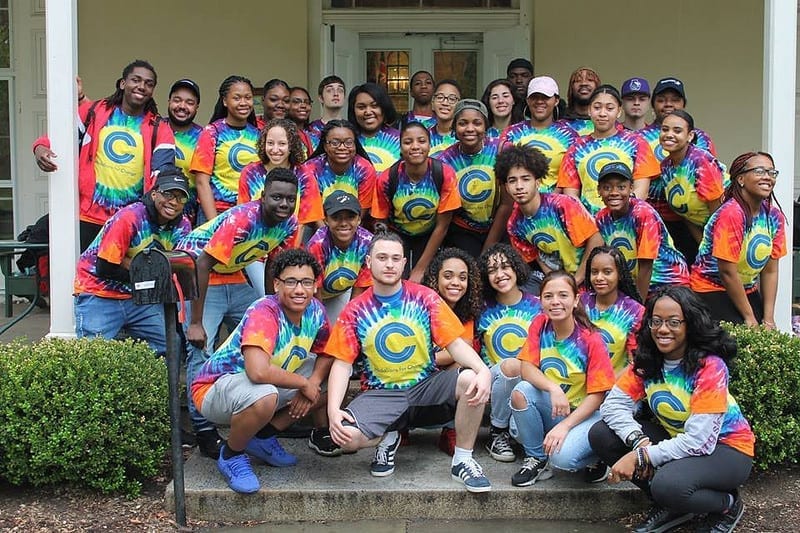 Every year the C5 Leaders senior class has the opportunity to plan their very own alternative Spring Break, the C5 Medallions for Change Service Trip. They choose a community outside New England, plan their service and fundraise as a class to reach their goal. This year, the seniors raised over $2,400 and decided to volunteer with various organizations throughout Philadelphia, Pennsylvania. Out of the 55 teens in the graduating class, 34 chose to spend their school vacation attending the service trip. While in Philly they served the Boys and Girls Club of Philadelphia, Aid for Friends, Lutheran Settlement Homeless Shelter, JRAid, Little Sisters of the Poor, Awbury Arboretum, Farmers Market, Cradles to Crayons and Food Trust. An optional visit to the Eastern Penitentiary to learn about the Mural Arts Philadelphia and engage in a panel about art and prison reform.
The teens chose Philadelphia because the art program budget for students was cut recently, resulting in no further access to arts programs. The Medallion class understands the importance of art as an outlet for people and how it sparks imagination and creativity.
The journey from Massachusetts to Philly was about six hours, but felt half as long since it provided another opportunity for bonding: something the class of 2017 takes seriously. Teens talked, had sing-a-longs and predicted what their trip would be like. There were jokes about waking people up when they fell asleep, so not a lot of sleeping happened. Prior the leaving teens heard from previous classes about their Medallion Trips, and how each person had an experience that made the trip unforgettable for them. Senior Geanna Landrum shared hers:
“My “aha” moment was when I volunteered at the Little Sisters of the Poor, a senior home. This service option was given for two days. After the first day, people came back boasting about how great of an experience it was. They met women with stories and cheeky attitudes. I also heard about death and ladies who couldn’t remember things that they used to. We were warned that we had to be able to handle the good and bad. “Only sign up if you think you can handle it,” we were told. I wasn’t sure if I could handle it because I had no experience with this sort of thing. But that was just it. I wanted something memorable. That special service that made it all worth it for me, I wanted to make a difference, so I signed up. I met a woman named Louise and we spoke for three hours. When we first arrived she was in the T.V. room along with a few other women. The staff who worked there told us beforehand that we’d be able to take them outside since it was so nice out. We were to team up with someone and take one of the lovely ladies. My partner was my best friend, Veronica. One of the staff asked Louise if she wanted to go outside which she quickly responded “no”. I started laughing because I felt her sass. After speaking to her briefly, I decided I would stay with her along with Veronica. We got her to go outside for a bit where we talked most of the time before we went back inside in the dining hall. We did laps on building, Louise in her wheelchair as Veronica and I pushed her along. She spoke so softly that you had to get close to hear her. She eventually told us that she was diagnosed with throat cancer. I could tell she needed the conversation and companionship.
I heard about her life and the goals she had had. Louise told me that her main goal was to get married and she never got that. She had other priorities at the time like her family. Her father suffered from bone cancer and her family needed her.
I didn’t realize how much it meant to me until I was leaving and was overwhelmed with tears because suddenly in three hours I made a connection with this woman and wasn’t ready to leave her. I didn’t know if she’d get a call for Easter or a visit on Christmas. Those things meant something to her. In a short period of time we built an unforgettable connection, and meeting her became the highlight of my trip. It’s moments like those why I genuinely want to serve. You never know how much something as simple as your time can mean to someone.”
The mood on the way home was different. Teens were beginning to realize that their C5 journey was going coming to an end. They reminisced about the experiences that changed their lives, talked about meeting each other and building the relationships they have today and reflected on the experience they had just had.
Before their trip, the teens didn’t know what to expect, but Philly was a place they quickly grew to admire. Everyone took something away from the trip. “I learned how much a small bit of service can be appreciated. The two four-hour service experiences each day were always met with overwhelming appreciation. I learned how much work is still left to be done,” said Kelsie Drown. “I learned that with the right group of people around you, you’re able to accomplish anything,” said LaVahl Bennett.
“It is important for young people to have this experience because it puts everything you have learned to the test, you are humbled, grateful and have the chance to see what you’re made of and witness your own shine. After five years of service, I don’t think I’ve ever felt so warm after volunteering, truly feeling that I’ve made a difference. I believe when you experience something like that you commit to serving others not just because it’s expected of you but because it means something to someone,” said Landrum.