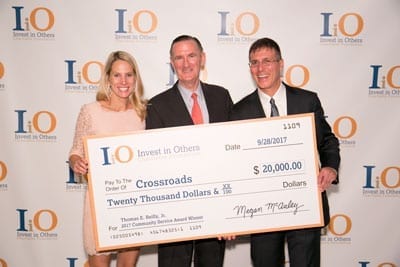 Thomas E. Reilly, Jr., founding principal of Birch Hill Investment Advisors LLC in Boston, won the 2017 Invest in Others Community Service Award, one of seven awards presented on September 28 at the eleventh annual Invest in Others Awards Gala in New York City. Reilly earned the honor for his charitable work with Crossroads, which received a $20,000 donation from the Invest in Others Charitable Foundation.

Hundreds of nominations were received for the Invest in Others Awards this year. Winners were selected based on their leadership, dedication, contribution, inspiration, and impact on a non-profit and the community it serves. The Community Service Award is presented annually to a financial advisor who has made an outstanding impact on a community through managerial contributions to a non-profit organization for at least 3 years. This includes serving with distinction as a fundraiser, board member, or other executive position. Reilly was one of three national finalists for the award.

“The Invest in Others Awards showcases the selfless efforts of financial advisors to improve their communities. Under Tom Reilly’s leadership as a Trustee for more than two decades, Crossroads has grown exponentially and changed the lives of hundreds of at-risk youth. Tom’s longstanding service demonstrates his dedication to paying it forward and improving outcomes for children and teens in his community. Tom and the other advisors honored this year represent the very best of the financial services industry,” said Megan McAuley, Executive Director and President of Invest in Others.

Reilly has had a transformative influence on Crossroads since he joined the Board of Trustees in 1993. Over his twenty-four years of service, he has helped transform Crossroads from an organization offering summer camp experiences into a high-quality, multi-year youth development program that serves at-risk youth during the school year and summer months. Crossroads programming has resulted in impressive outcomes over the past ten years – 95% of program graduates are accepted to college and 78% of them are first-generation college students.

Reilly’s relationship with Crossroads continues to blossom as he has taken on progressive leadership roles and now serves as a member of the Capital Campaign Cabinet. Crossroads met and exceeded many elements of its recent strategic plan thanks to Reilly’s contributions. Reilly’s guidance as Development Chair in the late 1990s also led the Board of Directors to increase revenue for programming by more than 50%. As a recipient of college scholarships during his undergraduate career, Reilly sees his long tenure of service as “paying it forward” so today’s youth can benefit from the same kind of generosity he received.

“Community action is part of who we are at Crossroads. From our youngest participant, to each and every member of our board, everyone in the Crossroads Family knows the value of giving back, and we are so honored to have Tom as a member of that Family. His dedication to the youth we serve is an inspiration, and we can think of no better recipient of this award,” said Crossroads President Deb Samuels.